The EMDA® Physionizer Current Generator is a minimally invasive method of enhancing local drug penetration across the urothelium of the bladder and prostatic urethra, resulting in greater quantities of local drug being delivered to a greater tissue depth than is achievable by passive diffusion alone.

It helps to avoid many of the side effects often associated with systemic administration. It is possible that conventional passive MMC administration fails because the T1 disease has invaded to a depth that the drug cannot penetrate by passive transport alone or that higher-grade cancer cells are less chemosensitive.

Improvement in the accumulation of MMC in bladder tissue at greater depths are possible with electromotive drug administration and has been proven both in-vitro and invivo using EMDA®.

For Hr-NMIBC, the rational for combining anticancer drug has not been applied consistently to the use of intravesical agents for the treatment of superficial bladder cancer, for which immunotherapeutic BCG and chemotherapeutic MMC seem to be a potentially effective combination. An improvement argument might be that BCG-induced inflammation may increase the permeability of the bladder mucosa such that MMC can reach the target tissue more easily and exert its anticancer effect.

The National Institute for Health and Clinical Excellence (NICE) currently believes that EMDA® MMC raises no major safety concerns. The NICE code for this procedure is Y49.9. 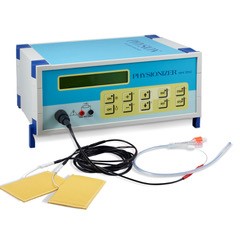 Are you a health professional?

Get in touch with us

For any enquiries or general information, please contact us